In Artwork
Other
Tutorials 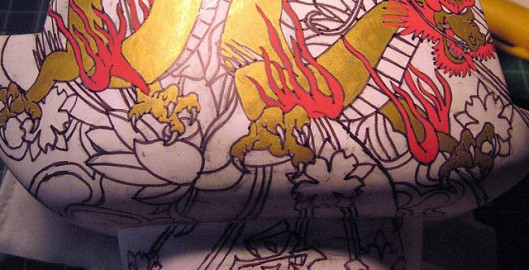 Sorry, after a nice weekend, I am a bit late w/ part 4 of of my WIP Artoyz Elements Earth, Dragon vs. Phoenix. Last time we left off, I was outlining in black the rest of the Phoenix. I completed that side of the figure and will keep the final look of a secret till later! Right now, I concentrated on the Dragon side of the figure; I taped up another piece of paper + paper towel to keep the Phoenix side safe while I work. The paper towel is to prevent any unnecessary bumps or scraps against the Phoenix side.

So I start w/ the Dragon, since he is the main figure of this side by applying gold and red:

Now at this point I realized I didn’t draw in scales for the Dragon, which it doesn’t really need it, but think it would look so much nicer if it had some scales (would also match the Phoenix). So, I whipped out my pencil and started to add scales; problem is, the pencil didn’t really mark well w/ the gold paint, so used my black paint marker to add them in:

Instead of continuing to do all the scales, decided to stop at a certain point and go slowly and make sure everything is nice and neat and continue on. So decided to paint up the lotus flowers:

Next the cherry blossoms and “Love” kanji:

Now with most of the major elements colored in, I wanted to start outlining in black the head:

Continue down to the flames, hand and fixing up some of the scales:

I spent a few hours on this tonight and am exhausted after awhile! I think it looks pretty good up to this point, and will stop for today. Will continue tomorrow, thanks for looking!