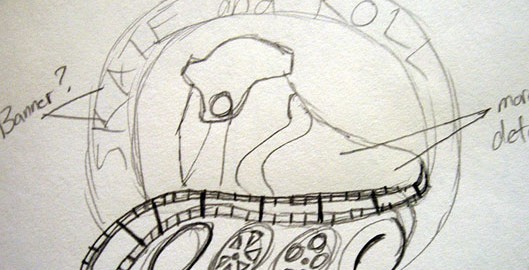 An insight into the thought process and creation of the Spin & Rolling logo, including sketches and rejected designs.

Everything goes!  Inline skating, skateboard, longboard, in-line hockey, aggressive skating, freestyle slalom, free-riding and everything else that uses small wheels.  Their goal is to promote, organize skating events, and grow the sport of freestyle slalom skating in New York and city’s around.

Check out this video to get a better idea of what they do:

The client wanted a logo that represents who they are and what they do: freestyle slalom (Spin) and recording videos of their awesome moves (Rolling).  In my mind, there are two essential elements that need to go into this logo: skates and something related to video/film.

As usual, when I begin to do a logo/design piece, I usually try to sketch it out first to see how it looks like before I begin to vector it up.  Taking my beat-up/almost-used-up sketchpad and a simple mechanical pencil, I sketched up some simple designs (click images to make it larger): 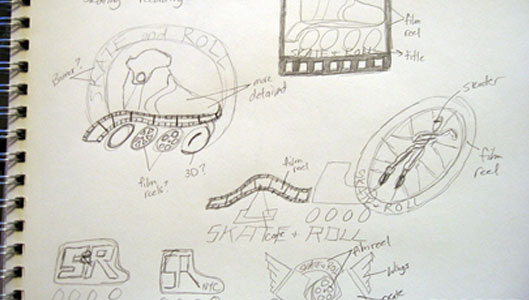 The sketches were made w/ the two elements I had in mind, trying them together and see what happens.  My first initial sketch was the one I liked the most, basic inline skate with a film reel bottom (showing the skate ‘flying’ by) and film wheels as skate wheels: 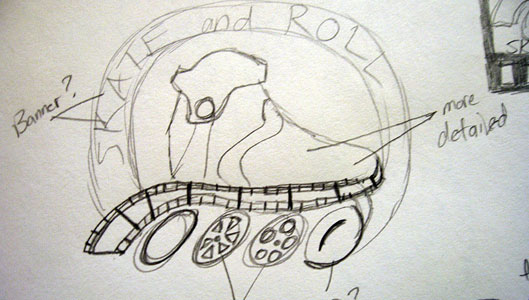 The words Spin & Rolling would go on top, maybe w/ a banner? Not 100% sure yet, but just sketch it down anyway.  I liked the other ideas as well, but this one was my favorite.  The client agreed as well.

So I started to do my initial vectoring of this basic sketch – while I feel more comfortable using Illustrator today than I did a few months ago, I still find it a lot easier to do all beginning work in Flash.  I can bend lines, make shapes, color, etc. a lot faster than in Illustrator.  I will do all final work in Illustrator, but for the basic beginnings, I’ll stick to Flash (for now).

My first vector of an inline skate, using my client’s own personal skate as reference: 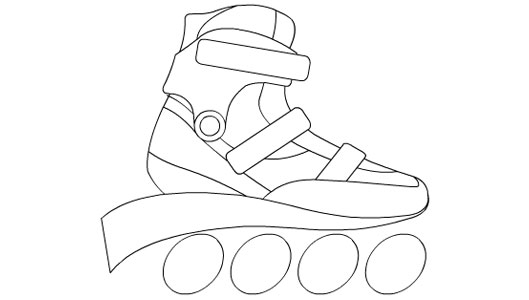 Not bad for a first vector, but I found it a bit too complicated; the logo would be used on a variety of items and sizes, so making it too complicated would make it hard on the eyes.  So I made it less complex, added some colors that matched the client’s personal skates and gave a few choices to make: 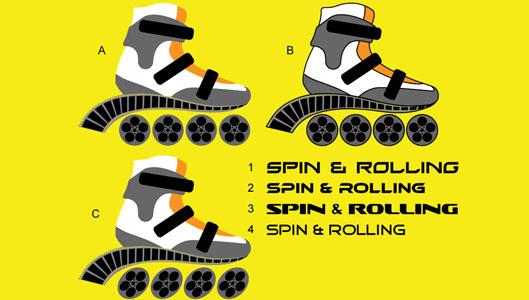 A: No outlines, B: Outlines, C: No outlines and ‘faster’ wheels; also some font choices for the wording (fonts were all free for commercial use).

Client liked the no outlines look of the skate and the ‘faster’ wheels; client did request that the skate be angled about 45 degrees forward.  As for font, all were good except #4.  I liked #1, so I used that one for the wording.  Going back to my initial sketch, the words were in a circular banner, so tested this look in vector form with some design elements like stars and in different colors (sometimes playing around like this helps me to see what works and what doesn’t work).  I didn’t like how a banner would look with the words, so instead it became a circle: 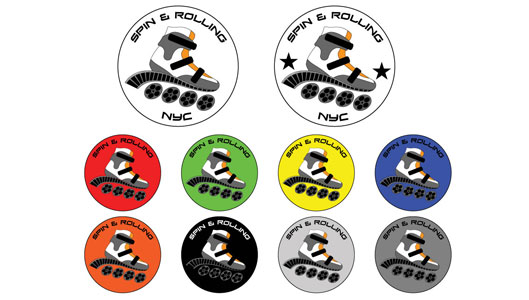 From this set of test logos, the client liked the look of the circle, liked the light grey color, but wanted to add cones instead of stars (as with slalom skating, they skate around cones). My only problem so far is that the ‘faster’ wheels don’t look like film wheels anymore; client agreed with me and I can change them back to the normal wheels.

Now that I have a good general idea of what the client wants, I can start to do the full sketch in Illustrator, adding all details and cleaning things up.

So the initial Illustrator vector comes out like this, adding in some more visual elements and giving it a cleaner look: 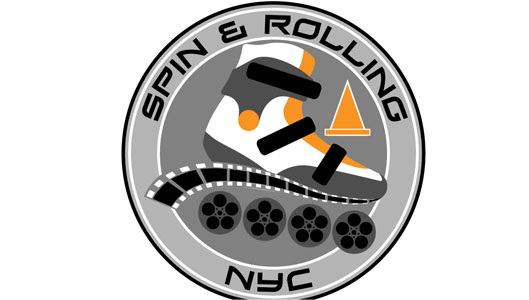 Not perfect, but not too bad.

Client didn’t like the cone where I placed it and wanted it in the same position as the stars in the other picture.  Also client wanted some blue/sky blue color in the logo as well.

When I do logos and designs, I want to make sure the client sees as many possibilities as they can, to make sure they are getting exactly what they want.  This is probably not a good idea, but I feel this is very important.  I vectored up a few iterations and showed this to the client: 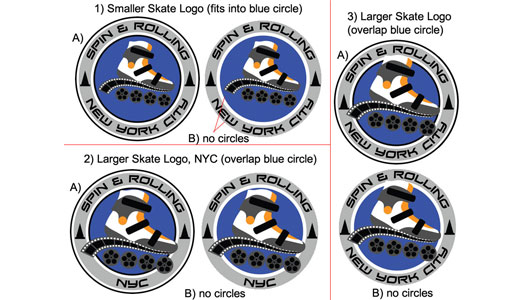 The client chose the same one as me, 2B, which is great.  I feel having the skate overlap the outer circle gives it a much nicer look.  The client feels the cones are too sharp at the top, and that the blue is too dark.

When working on these logos and designs, sometimes looking at it again with a fresh pair of eyes makes a huge difference.  Walk away and come back later and you’ll see things that you didn’t see before.  Looking at it again, I felt the logo needed an outer black circle, so I added it in, made rounder top cones, added sky blue colors and came back to the client with these choices: 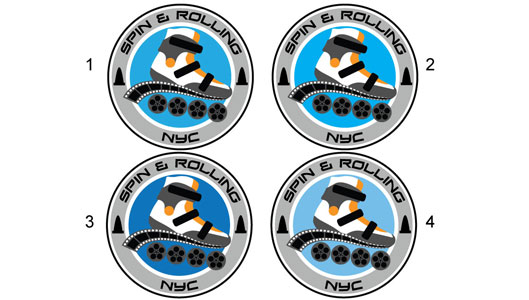 Client chooses #4 sky blue color but feels the cones are still too long and how would stars look instead…? So one more iteration with cones changed and stars added: 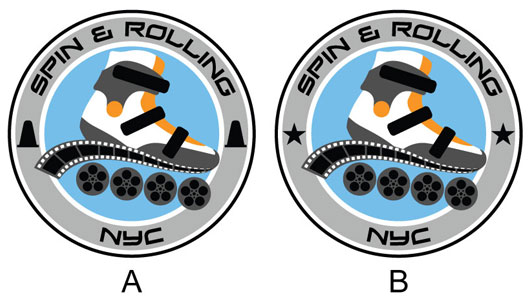 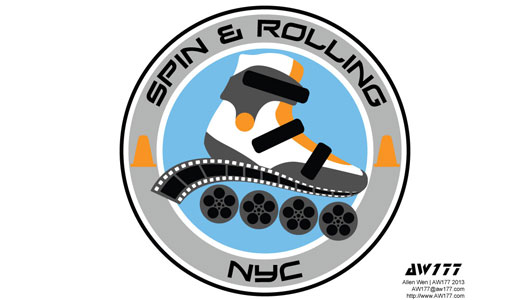 I hope you enjoyed this blog post and that it gave you an insight into my design process; I know there were many areas which I could have done better, but by giving the client my all and making sure they are happy, is the most important to me.  Thanks!