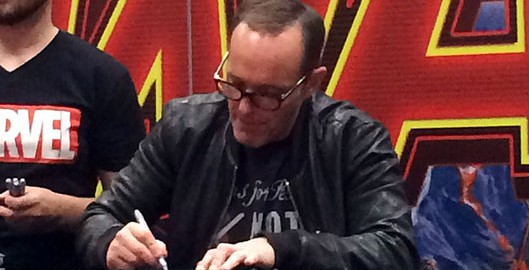 Headed back down a bit earlier, with the notion of being free to look around more and observe other artists’ work and to find some inspiration for my own work.  I got rid of shopping for things I wanted and for my family, so today would be a great day to myself. 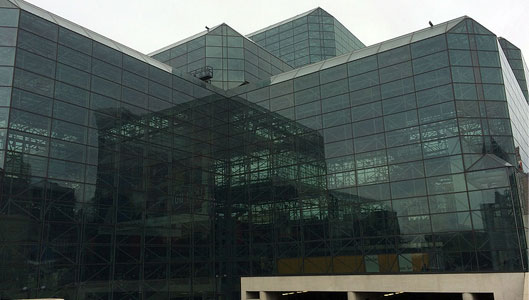 Again, in no particular order…

Walked by the Big Hero 6 booth, not sure how I feel about the movie just yet, but Baymax is just too cute! 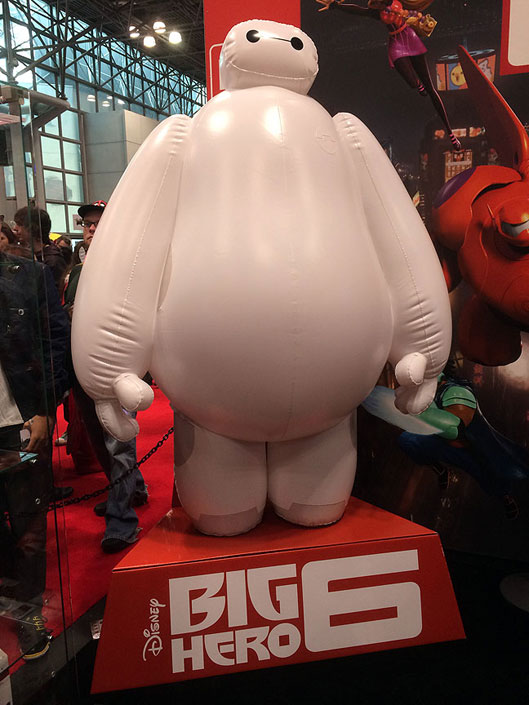 Saw these t-shirts at the WeLoveFine booth – that’s the booth that gives out giant duffle bags to those that buy something there.  I liked the “Death Star Tech Support” since I do that during my day job, but it hit a little close to home and decided not to buy it! 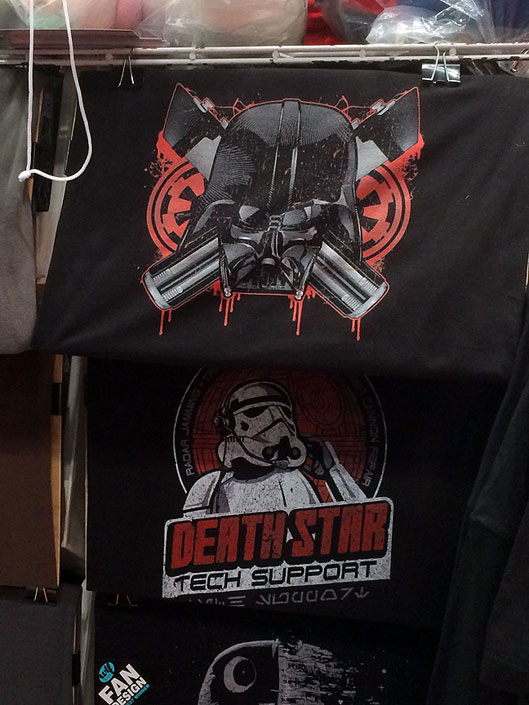 Also saw these Avengers and X-Men shirts which I thought was done right.  Nah, no more money to spend on t-shirts (little did I know)! 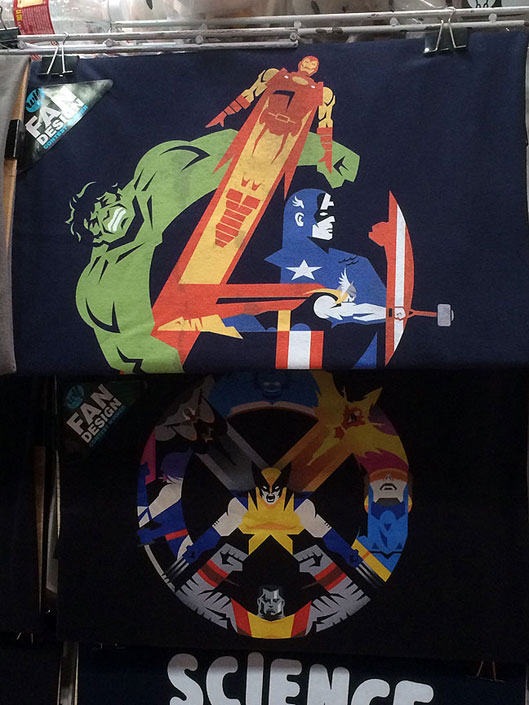 At first, a lot of people were running up to this to take pics and I thought wow, Chevrolet got a cool Bumblebee Transformers robot to promote their business, but later found out it was a cosplayer! Best. Cosplay. Ever. 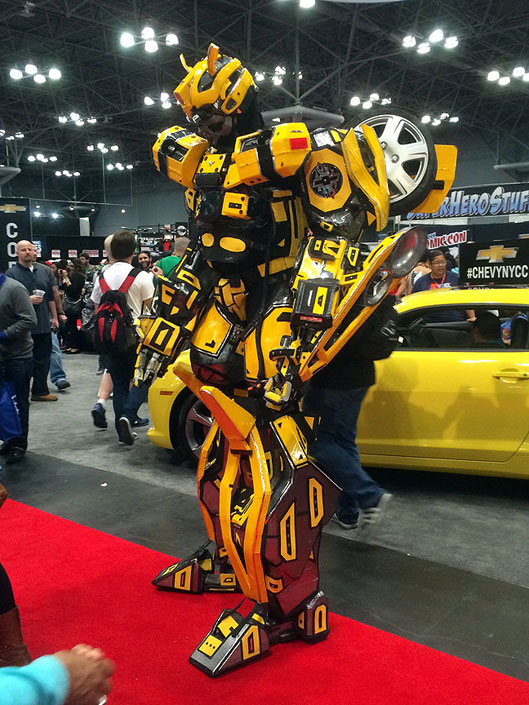 The Midtown comics booth revealed the Madame Tussauds’ Hawkeye statue, where you can go and take pics with it.  Pretty lifelike I must say, never really saw one of those wax statues up close. 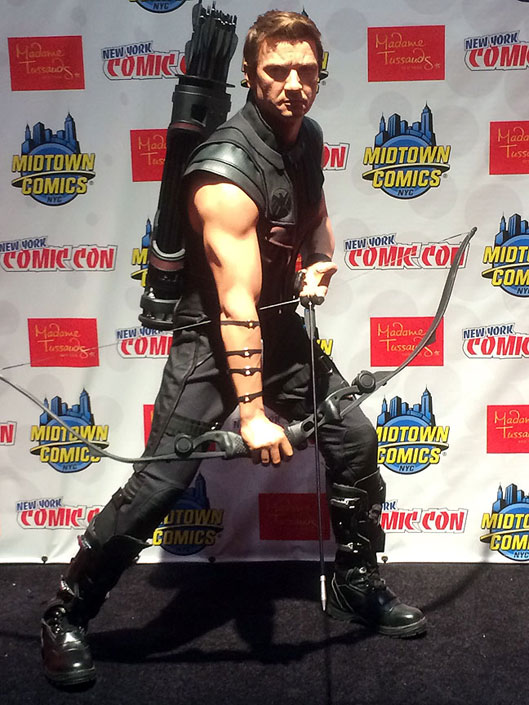 Walking through the con, you’re bound to find some cool cosplays, but this one was just plain awesome: Blankman! 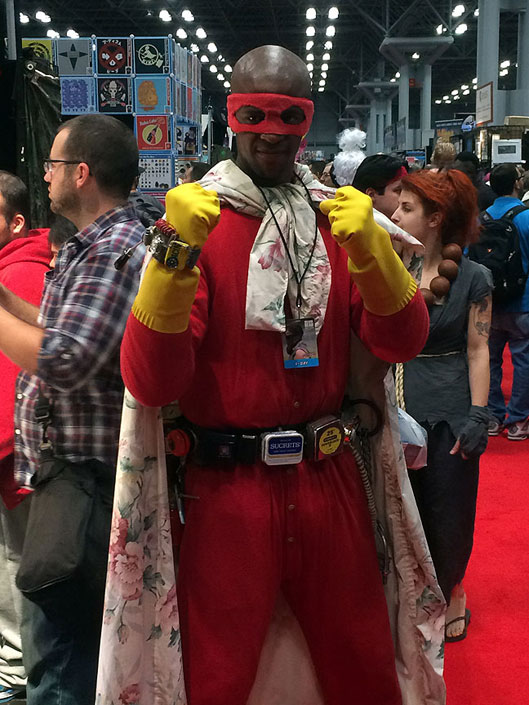 This guy had the look down cold!

Walked by a booth called Stylin that sold only Star Trek stuff; this t-shirt cracked me up – “I make it so” by Commander Riker! 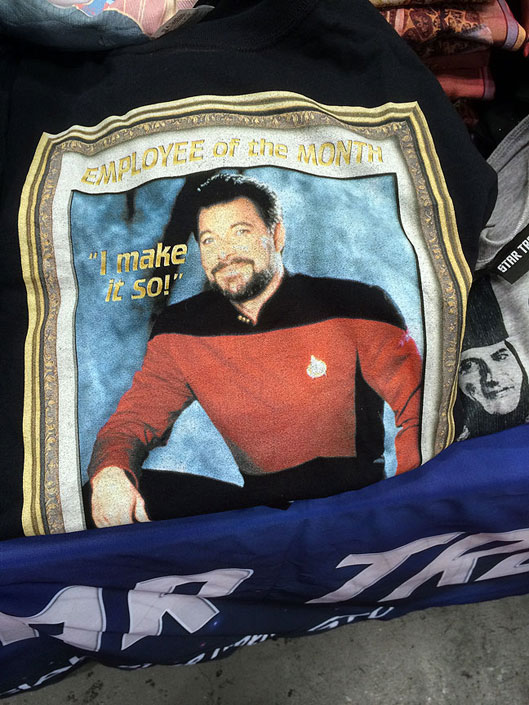 Yea I like Star Trek – can you name all the captains? 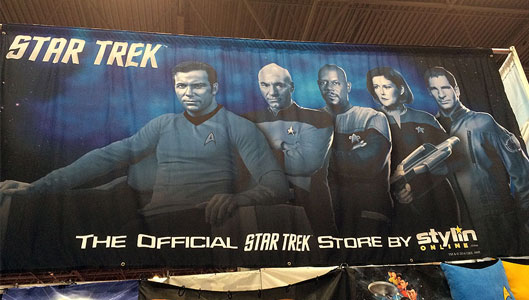 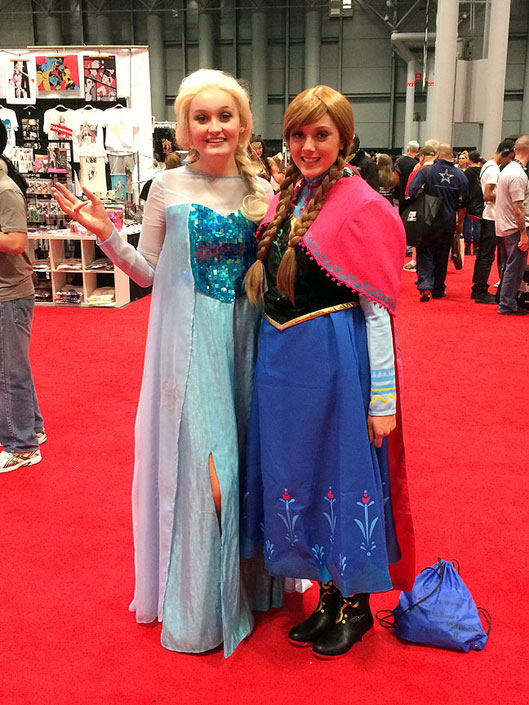 Hit up The Block at this time, and missed out on this booth yesterday so wanted to check it out today – AcidFree Gallery, makes really cool Transformers/GI Joe/etc. prints – had a few of mine printed with them as well.  Didn’t see any I wanted badly enough to buy though but go check them out: AcidFree Gallery 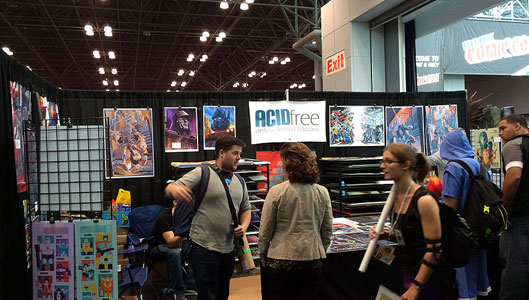 A custom made by my man, Ian Ziobrowski: makes the coolest, smallest and weedish custom pieces around! 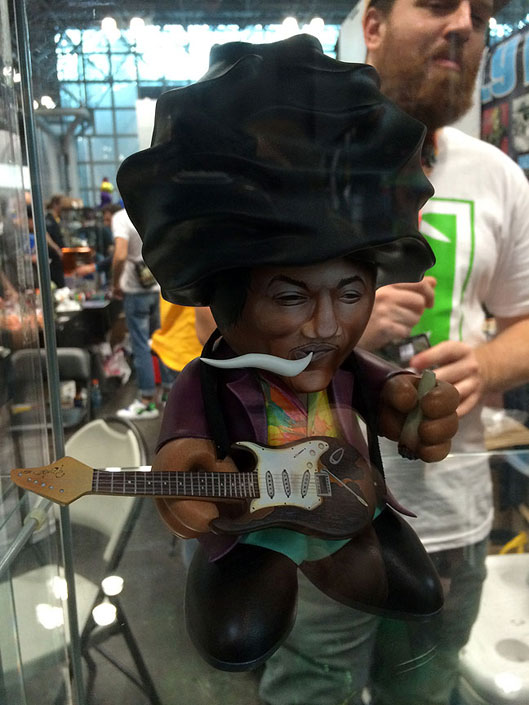 Checking my watch, I knew that Clark Gregg, the actor who plays Director Coulson in Marvel’s Agents of SHIELD and Agent Coulson in the Marvel movies was appearing at the Marvel booth for autographs.  I heard you had to make it to the booth at the start of the con, hope to win tickets to get an autograph, and then wait and finally get to meet the man.  I was having none of that, I didn’t want to waste time waiting just for an autograph.  So I went to the Marvel booth to see if I can catch a glimpse of him.

Once I arrived, there were a lot of people there and I somehow squeezed and wiggled my way to the front: 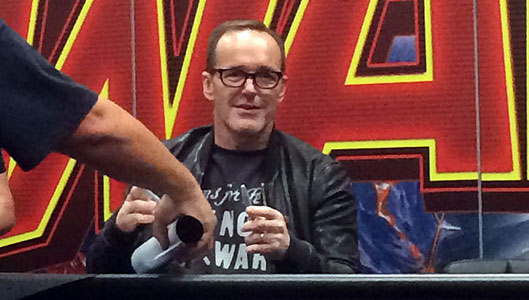 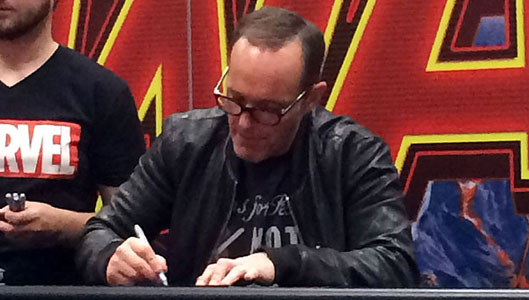 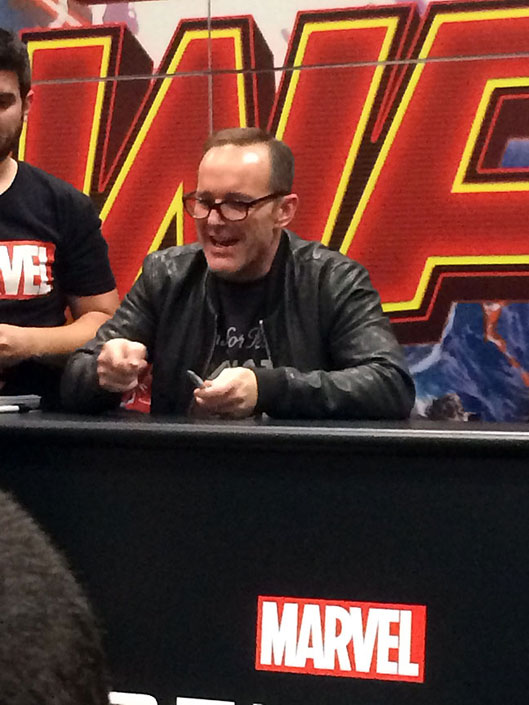 At times Clark would get up and hand out autographed prints to the crowd, and sign items the crowd would hand to him: 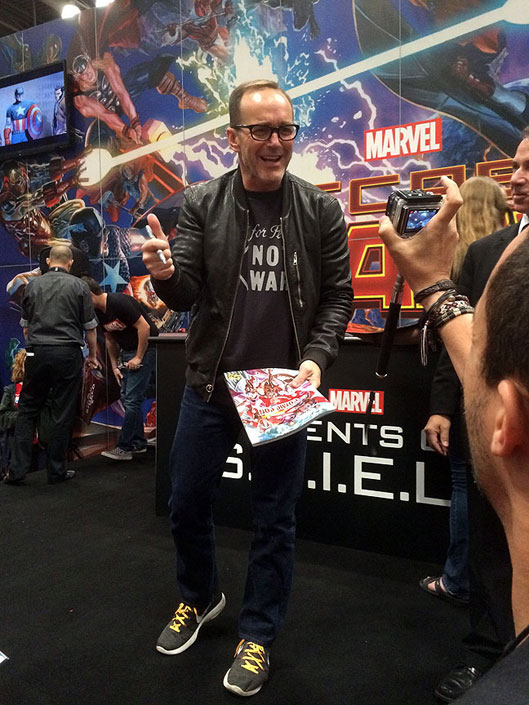 I thought, how cool would it be to get one of those autographed prints? I know my wife is a big fan of the show and of him.  Clark was once again handing out prints and heading in my direction; so just like everyone else, stretched my arm out and put my hand out, hoping he would hand me a print… 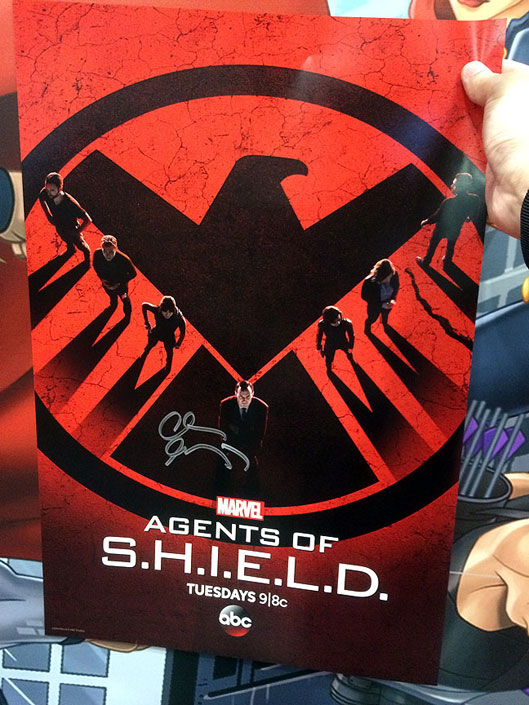 He came right by my direction and handed me one! I was floored; called my wife right away and showed this to her – she was really happy! I had to go get something to protect it so I can bring it home; frickin’ awesome! 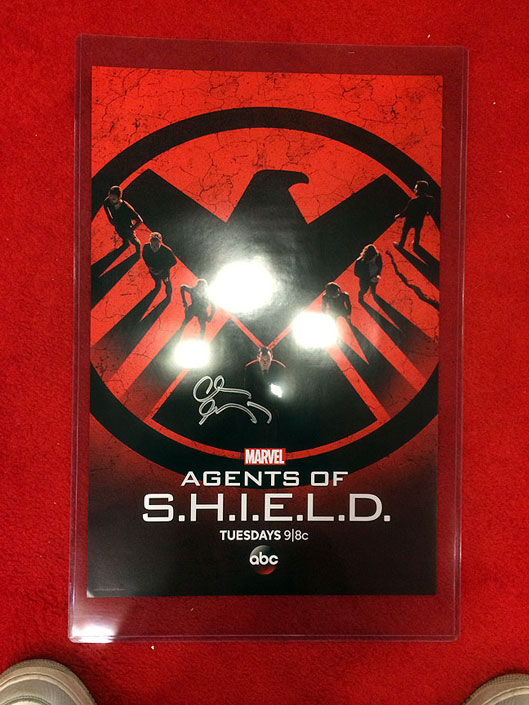 So happy with my print, I decided to walk towards the floor to areas I haven’t seen yet.  I walked by this booth of really vintage toys and no wonder, look who owned it: 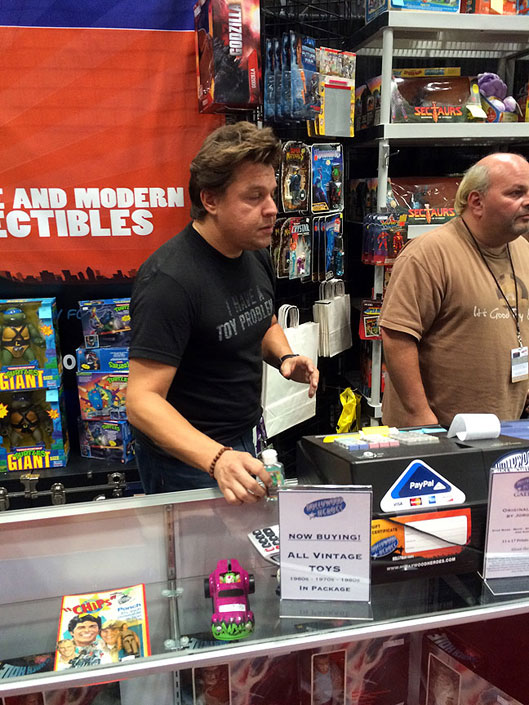 The Toy Hunter, Jordan Hembrough! He sure had a bunch of cool, vintage toys that I remember from my childhood… 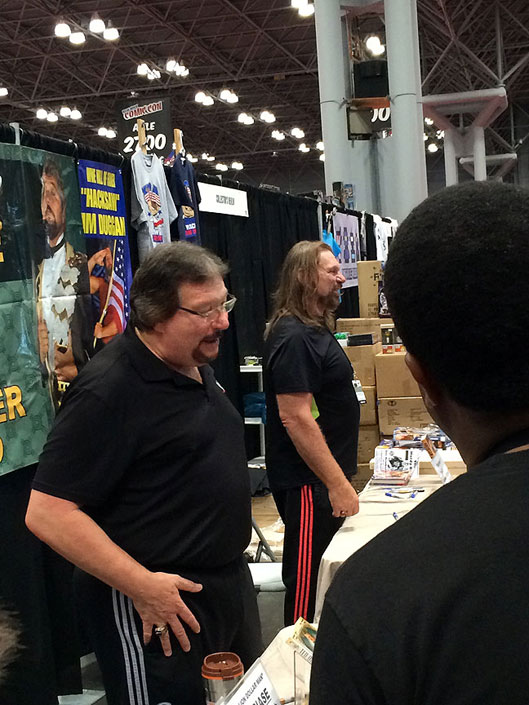 Heard Sgt. Slaughter and Hulk Hogan was there as well but didn’t bother to look for them.

That concludes day 2 of NYCC…as I was leaving, noticed a cool display for 75 years of Batman: 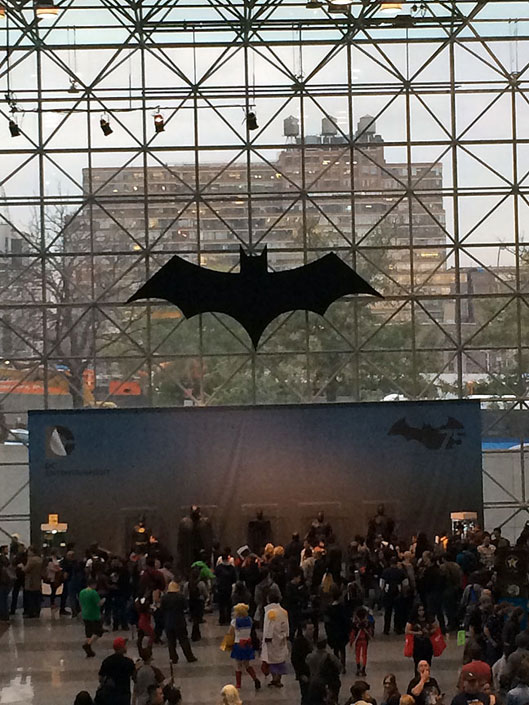 Bat signal calls, till day 3, the final day at the con!