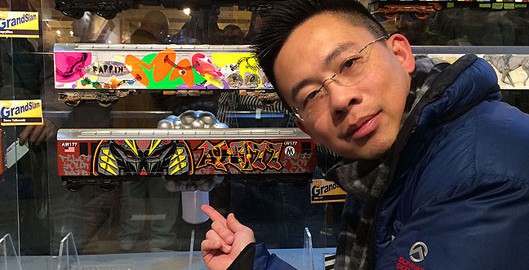 I found out from my man Benny Kline that my All City Style train from The Grand Slam show at PIQ sold a while back and today the buyer came and picked up my train! A great feeling that someone likes my art enough to make the purchase! A big thank you to the buyer!

Instead of me trying to describe what All City Style – The Grand Slam show is all about, I figure a snippet from the official press release more than sufficiently sums it up: 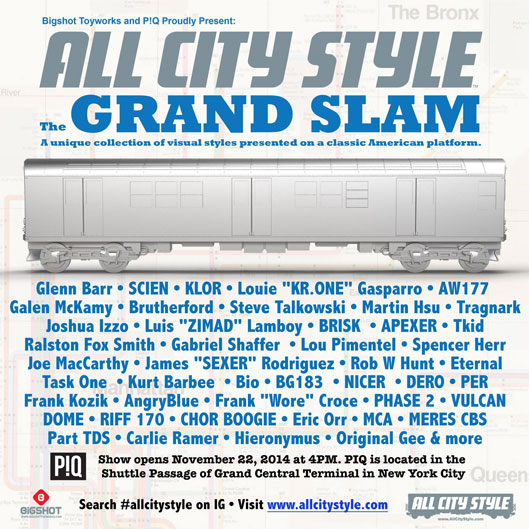 Bigshot Toyworks and PIQ Products present All City Style: The Grand Slam, an art show of one-of-a-kind custom painted All City Style subway train models. The Grand Slam opens on November 22, 2014 at 4PM in the PIQ shop located in the Shuttle Passage of New York’s Grand Central Terminal.  The Grand Slam show runs concurrently with several different model train shows on display in NYC during the holiday season.    Celebrating the unique creative expressionism of late 20th century NYC, The Grand Slam art show brings viewers back to the days when each passing train exploded with color and style.  The Grand Slam showcases the works of the pivotal artists that pioneered this art form, as well as many others that have been inspired by the vibe, aesthetic and spirit of the past.  The All City Style 20-inch-long subway train “canvas” allows these artists to express themselves freely while paying tribute to the movement and culture that inspired a generation.”

Video of the show shot by Roderick Paulus of ToyMasters Video Magazine:

When I was asked by my man Benny of Tenacious Toys and Klim of Bigshot Toyworks to do a train for the show, I was quite honored to be a part of this very talented pool of artists!

If you didn’t know what they are, All City Style trains are plastic train “canvases” that are about 20″ long and 3″ tall; they come in halves and when you place 2 halves together, you can form 1 full train: 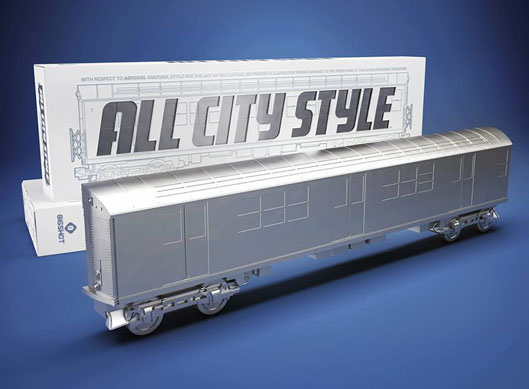 To begin my design, the ACS trains look just like the MTA trains from back in my day, so I wanted to add old school MTA elements on it, like the old logo.  I also wanted to incorporate some of my travels on those trains, I used to take the 7 train all the time and back then they had those redbird trains with the USA flag, so I knew my train would be similar to those 7-redbird trains.

I wanted my train to have an implied message on it and since it is a train with a conductor ‘piloting’ it, I wanted to use my Machine Type mech on it, because in a mech you get to “Pilot Your Fate”.  I wanted to add my artist name in colors matching my stealth Machine Type mech, and although it’s not a full on wildstyle graf letters, it’s enough to give it some style and know what it says.  After working on it for a few days in Illustrator, refining it over and over again, I came up with a design that I liked (click pic to enlarge):

Working on and off on the train between my full time job and family responsibilities, I was finally done with my train in a month.  It looks very similar to the original Illustrator design: 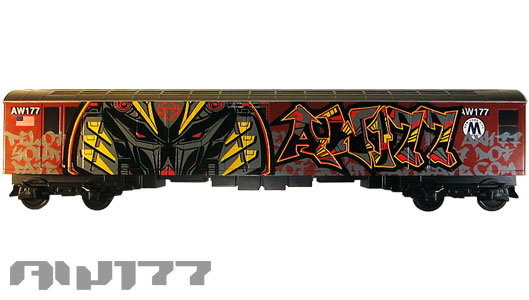 On the day of the show, I headed down to Grand Central Terminal: 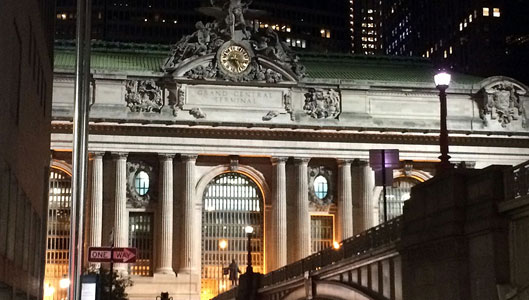 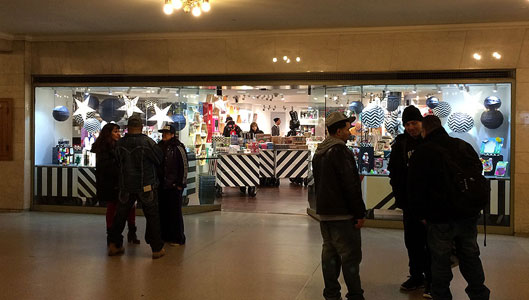 The Grand Slam show had all the artist ACS trains on custom made, laser etched stands; placing a train on each side made it look like 1 full train, very clever and unique way of display.  They were placed in the window of P!Q facing the NYC Transit Museum, which is funny because everyone who left the Transit Museum would pass by P!Q and would see a celebration of art trains that had graffiti on them! Oh the irony…nice placement guys!

From the outside of the store: 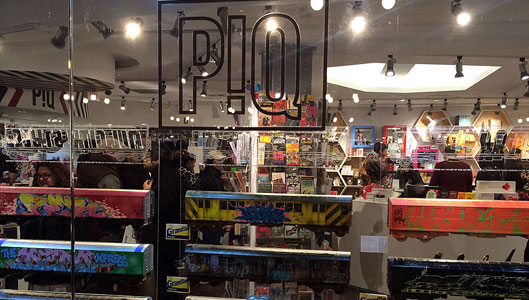 From the inside of the store (mine is on the bottom-middle rack): 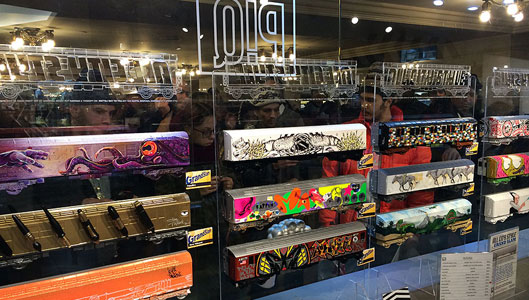 Close up of my train on the display rack;  I love how Klim used NYC Metrocard designs as artist labels! 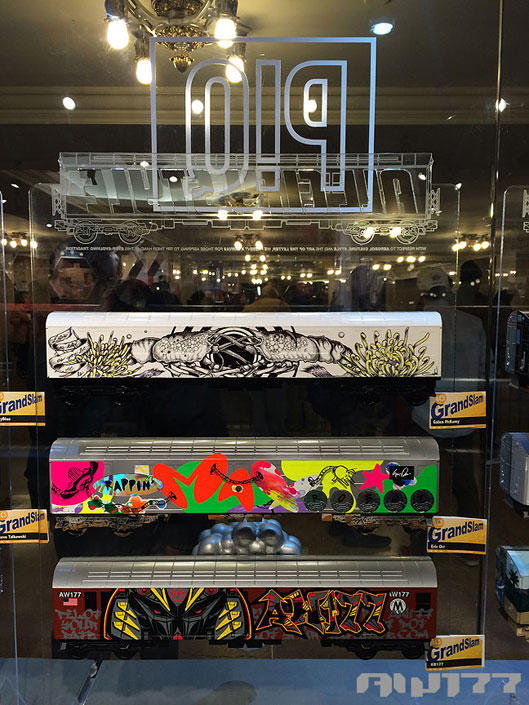 Me and my train – very proud to be a part of the show! 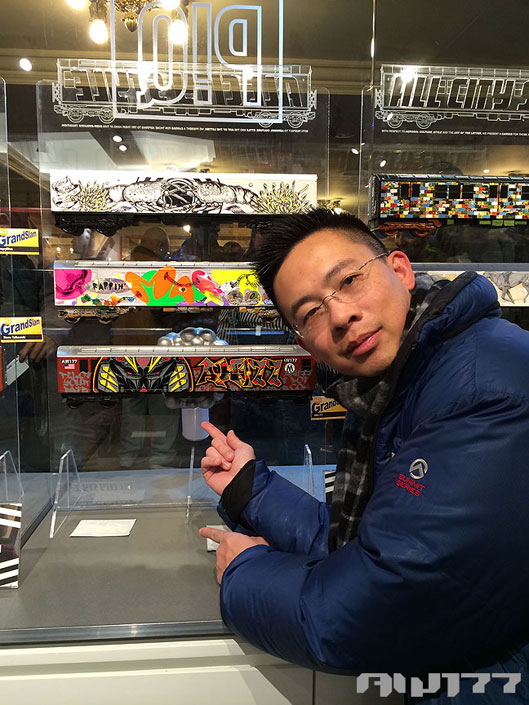 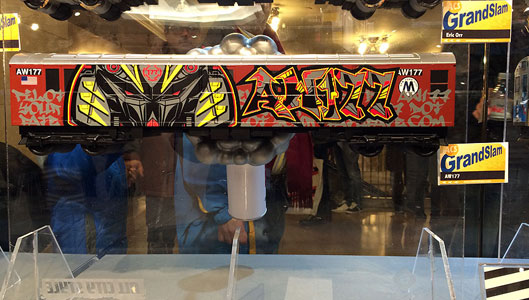 The price list in case anyone is wondering how much these awesome custom one-off trains are: 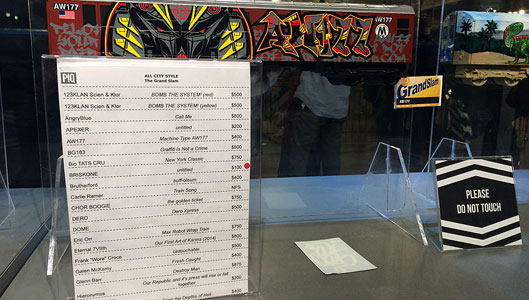 I arrived a bit after the start time of 4pm, and I heard that there were so many people lined up to see the show that it was just way crowded in the store.  I was very happy to hear how many people liked my train, and I was even offered a graphics job because of my train (although I don’t know how real this offer is, lol). 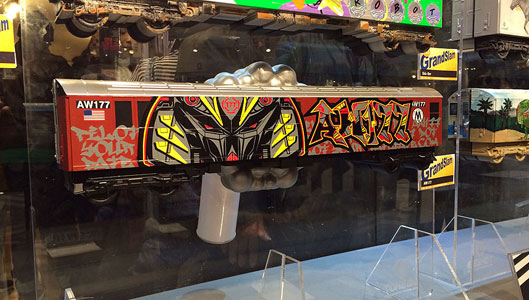 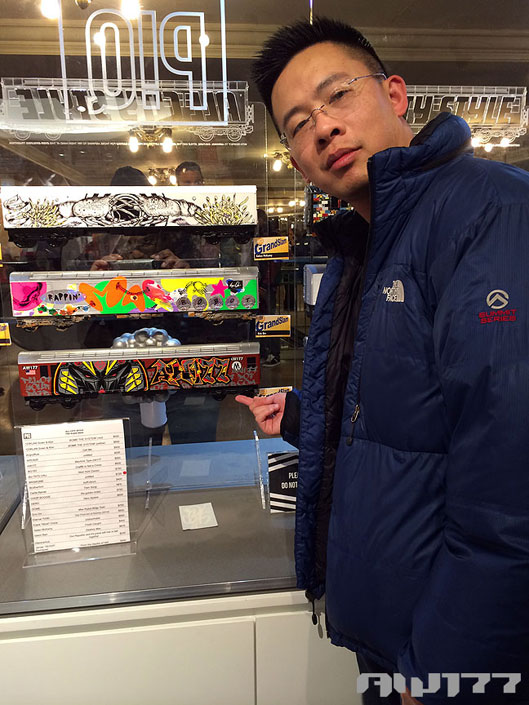 This was one of the best, most professionally put together custom shows I have been a part of and I know I said it before, I am really proud to be in the show and at the store seeing all these awesome trains on display! The show runs for a month so stop by P!Q in Grand Central if you can and check them out – if you snap any pics, tag me or ACS on Instagram/Twitter: #AWen177 #allcitystyle

If you want to see more pics from the show, check out some pics taken by:

Oh and if you buy my train, thank you very much and let me know who you are!

There may be a future post about the work in progress of my train in case you are interested in my workflow.  Stay tuned!